Tastes from Around the World

Food brings people together and it functions as an expression of cultural identity. Throughout history humans have brought the food of their countries with them wherever they go and cooking traditional food is a way of preserving their culture when they move to new places.

Tastes from Around the World Recipes 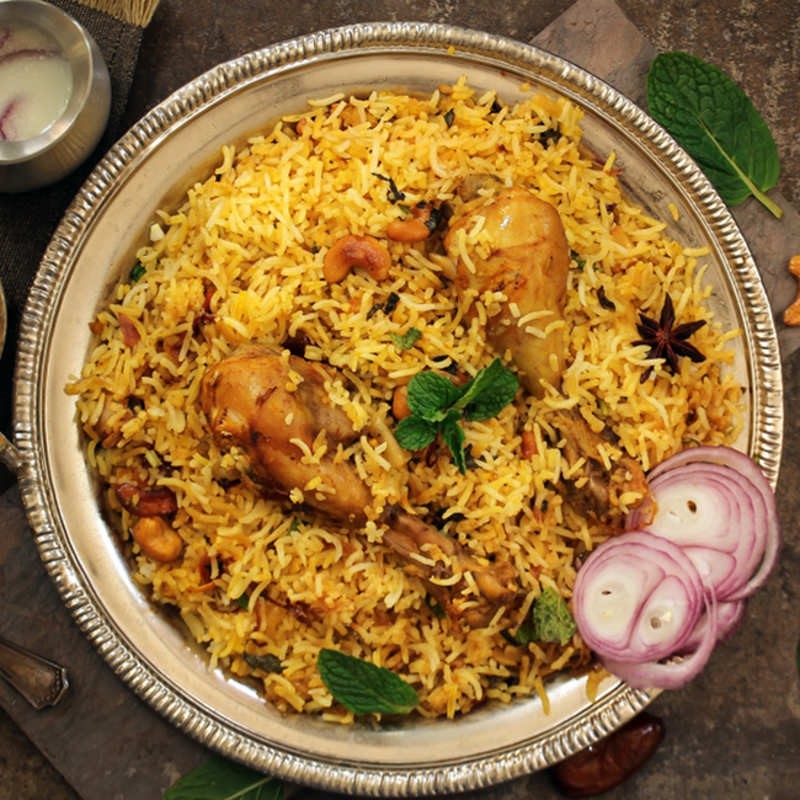 Once a dish for royalty, today biryani reflects the flavor and traditions of each locality and is a common dish across many places in Pakistan.  My entire family loves rice and biryani is our favorite, and everyone knows how to cook it. It’s my all-time favorite that is why I choose it. It’s so popular, Its rich flavor. It is a hearty meal that one can enjoy at any hour of the day or night.

If cooking in a pot, cook on a medium heat until the rice is done completely. If the rice is undercooked pour ¼ to ½ cup boiling water at this stage. How much to add depends on the quality of basmati rice. Cook covered until the biryani rice is perfectly done, grainy and fully cooked. Rest it covered for 15 mins.

If cooking in a cooker, cook for 1 whistle. Later remove the cooker from the hot burner to stop cooking further.

When the pressure releases naturally, open the lid. Gently fluff up with a fork. 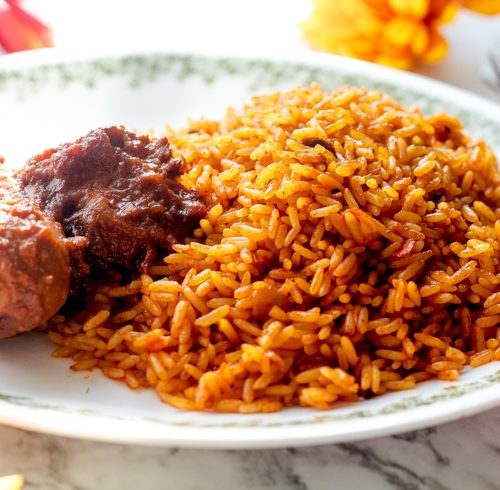 There are many African countries that serve this type of rice in gatherings but Nigerian Jollof rice is the best. According to research the history of jollof rice, it is from the 1300 century. 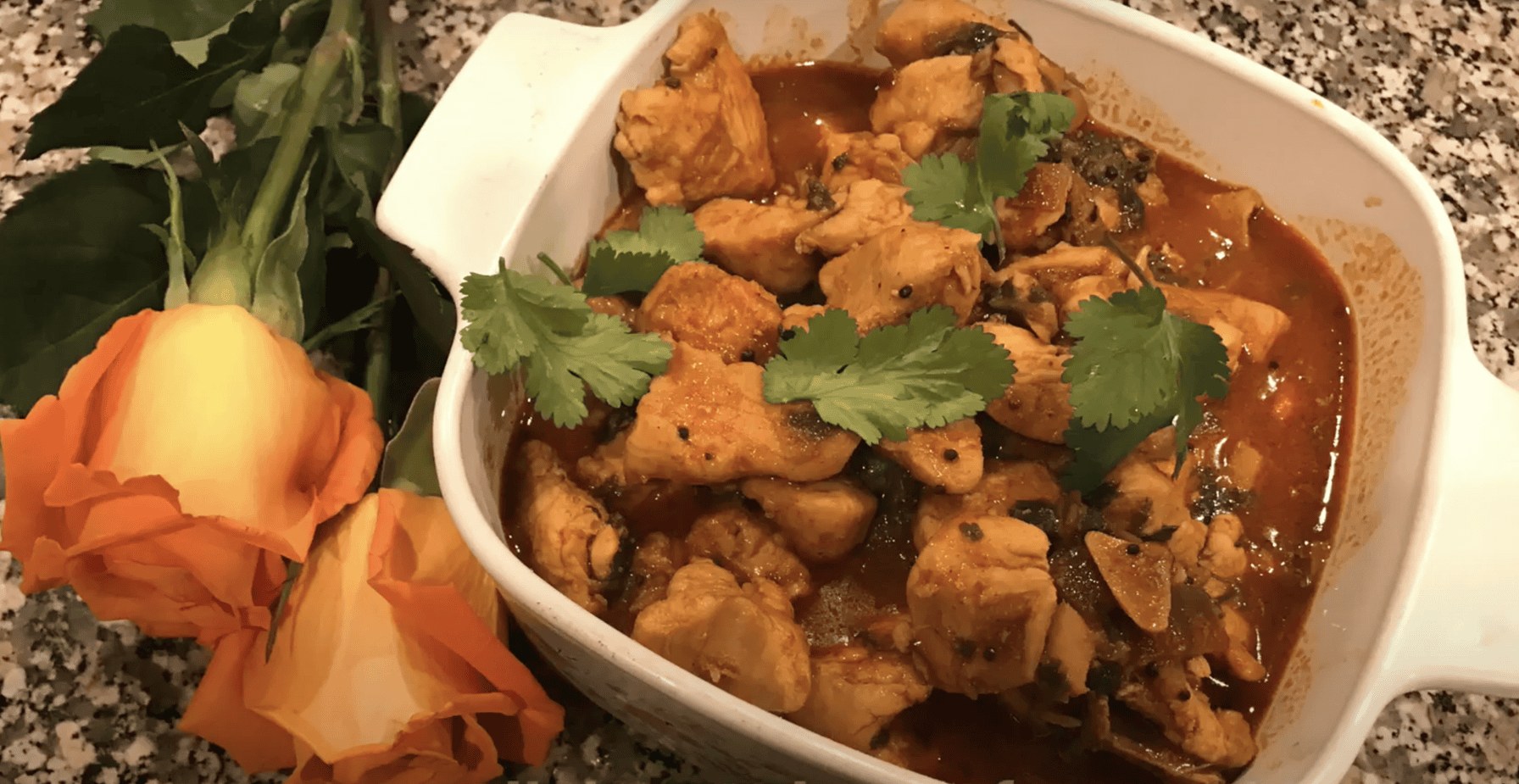 Most people know what Chicken Tikka is, but this is rarely eaten in the South of India where my family is from.  My grandma commonly makes this dish and has taught me how to make it as well.  My friends love it when I do make it.  I wanted to share this recipe, because this food is what makes me feel at home.  It is a dish I grew up with, and a dish that is also very integral to India's culture for millions of Indians.

Here is a video to help as well – https://www.youtube.com/watch?v=5LCJpG97NkQ&ab_channel=BessJ 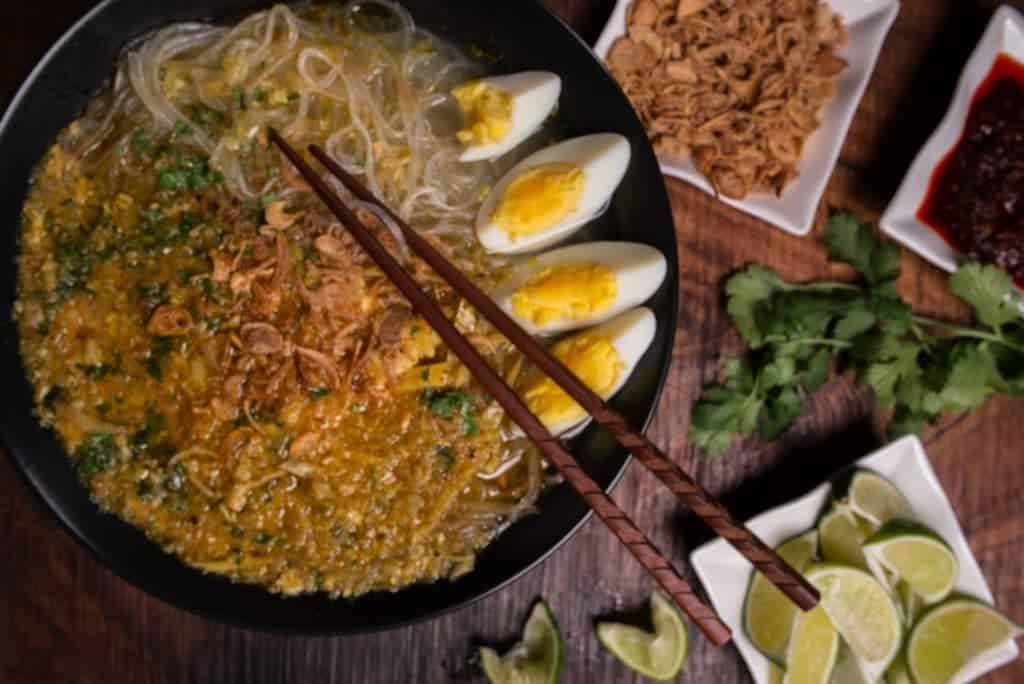 Crowned as the official national dish of Myanmar (Burma), mohinga is a fish and rice noodle soup that can, depending on the region, be enriched with an array of different ingredients by adding them to the soup or using them as a dressing or garnish. When it comes to the origin, various accounts exist, some of them dating as far back to the first century. By the 19th century, mohinga was regarded as a working-class meal due to its low cost, but over time, it has become so popular that today it can even be purchased as a ready-made soup. Although this fish soup is typically consumed for breakfast, it evolved into an all-day dish that is traditionally sold by street hawkers and roadside sellers. I choose to share this recipe because it was easy to make and my favorite dish of all Burmese food. I was from Myanmar too so it relates.

For the mohinga:  Heat the oven to 350°F. Spread the rice across a rimmed baking pan and bake, giving the pan an occasional stir, until the rice is an even golden color and aromatic, 20 minutes. Cool to room temperature and then pulverize in a clean coffee grinder.

To make the broth:  Select a large wide pot that will fit the catfish comfortably with room to spare. (An 8-quart pot works well.) Add the water, lemongrass, ginger, bay leaves, black and white pepper, and salt and bring to a boil. Lower the heat and simmer for 15 minutes.

Carefully lower the fish into the pot. The fish may not be completely covered in water, but that’s okay. Bring the pot to a brisk simmer, lower the heat, and cook gently for 15 minutes. Using tongs, carefully turn the fish over or at least rotate it slightly to cook the side that was sticking out of the water. Simmer for another 5 minutes or until the fish flesh pulls away cleanly from the bone. Using tongs and a spider or slotted spoon, lift the fish out of the broth and transfer to a bowl. Turn off the heat and let the broth sit on the stove.

Bring the pot to a boil. Lower the heat and simmer for 15 minutes. The broth should have a mild ginger-lemongrass flavor and be slightly cloudy. Strain the broth through a fine-mesh strainer. You will have about 10 cups. Give the pot a quick rinse (when it’s cool enough to handle), and return the broth to the pot.

In a small bowl, whisk together the powdered rice and a ladleful of the broth until no lumps remain. Stir into the broth. Bring the broth to a simmer and cook, stirring often, until it starts to barely thicken, about 5 minutes. Turn the heat to low and cook the broth at a gentle simmer while preparing the soup.

To make the soup:  In a wok or large skillet, heat the oil over high heat. Add the lemongrass, garlic, and ginger and stir-fry for 1 minute. Add the cooked fish, paprika, and turmeric, mashing the fish gently with a spoon to turn it into a coarse paste, and cook for about 1 minute. If you see any errant bones, pick them out.

Pour the contents of the wok into the broth and bring to a brisk simmer. Add the red onions and fish sauce. Simmer for 5 minutes more or until the flavors start to come together. Taste the broth: it should be on the salty side because the noodles will not have any salt. If it’s not that salty, add some salt or fish sauce. (At this point, the soup can be cooled and served the next day.)

To cook the noodles:  Bring a pot of water to a boil. Add the noodles and cook, stirring often with tongs or chopsticks to prevent sticking, for 5 to 6 minutes or until softened. Turn off the heat and let the noodles sit in the water for 3 minutes. Drain in a colander, rinse under cool running water, and give the colander a shake to remove excess water. If not serving right away, mix some canola oil into the noodles with your hands to keep them from sticking together. (You can also cook the noodles in advance and soak them in warm water before serving.)

To serve:  Divide the noodles among the bowls. Ladle the soup over the noodles and serve the hard-boiled eggs, crackers, cilantro, and lime wedges alongside. 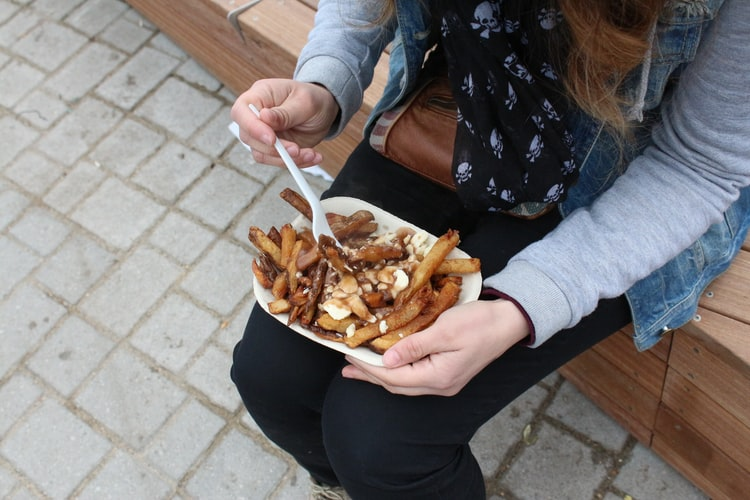 Poutine, eh? It is the classic, savory Canadian Dish. It is so, so yummy as the hot beef gravy slightly softens the fresh hand-cut crispy fries and melts the gooey cheese curds. It truly tastes like home, the true north strong and free. Since I was a young child, poutine has been my favorite food and every time I go back home I have to get some. There are lots of little things that can be done to make it your own. For instance, some restaurants add unique different toppings on the traditional version, such as pulled pork poutine, and I even had poutine from a restaurant once that added cinnamon to it was crazy (it was super tasty and unique). For me though, my favorite addition is just a slight drizzle of ketchup. No matter what you add to it, you can always return to the traditional fries, gravy, and cheese curds. Either way, the dish can be made as diverse as the great nation of Canada and I recommend you try it both traditionally and with a unique twist of your own.

Prepare the gravy: In a small bowl, dissolve the cornstarch in the water and set aside.

In a large saucepan, melt the butter. Add the flour and cook, stirring regularly, for about 5 minutes, until the mixture turns golden brown.

Add the beef and chicken broth and bring to a boil, stirring with a whisk. Stir in about HALF the cornstarch mixture and simmer for a minute or so. If you'd like your gravy thicker, add a more of the cornstarch mixture, in small increments, as needed, to thicken. Season with pepper. Taste and add additional salt, if necessary, to taste. Make ahead and re-warm or keep warm until your fries are ready.

For Deep-Fried Fries: Prepare your potatoes and cut into 1/2-inch thick sticks. Place into a large bowl and cover completely with cold water. Allow to stand at least one hour or several hours. When ready to cook, heat your oil in your deep fryer or large, wide, heavy cooking pot to 300° F.

Remove the potatoes from the water and place onto a sheet of paper towel. Blot to remove as much excess moisture as possible.

To Prepare Poutine: Add your fried or baked fries to a large, clean bowl. Season lightly with salt while still warm. Add a ladle of hot poutine gravy to the bowl and using tongs, toss the fries in the gravy. Add more gravy, as needed to mostly coat the fries.

Add the cheese curds and toss with the hot fries and gravy. Serve with freshly ground pepper. Serve immediately. 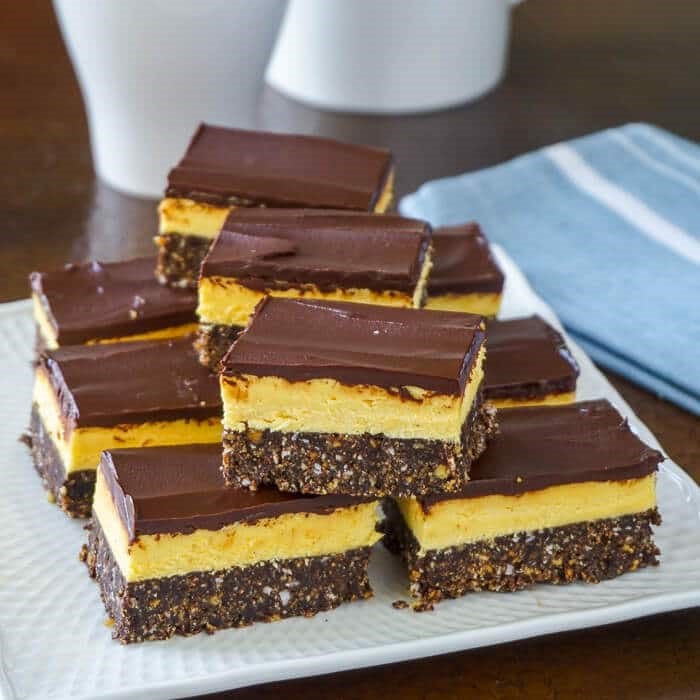 To be honest, these have never been my absolute favorite but they are a staple Canadian dessert. Done right, they are light and sweet and perfect for the holidays. I chose to include them in my submissions because it would be a disgrace to my home and native land not to include them. I encourage you to give them a try, who knows they may just bring out your inner Canadian! 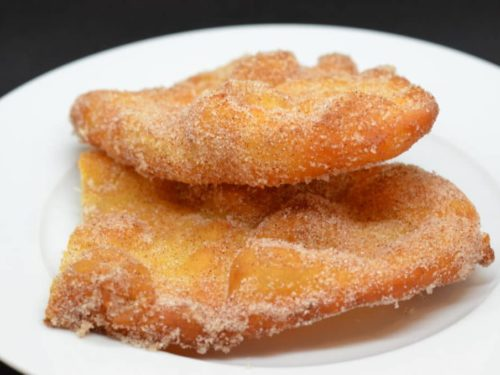 Where I grew up, we called these delicious treats elephant ears, but in other regions in Canada they are called beaver tails, which really is more fitting, eh? They are not hard to make really, but for me growing up they were always a treat we only got once a year at our local Canada Day fair. You can put almost any sweet thing on them, but my favorite is the classic way with just a sprinkle of icing sugar or with cinnamon sugar.  Whichever way you choose to eat it, it will be super yummy and hopefully reminds you of the shape of a beaver tail! 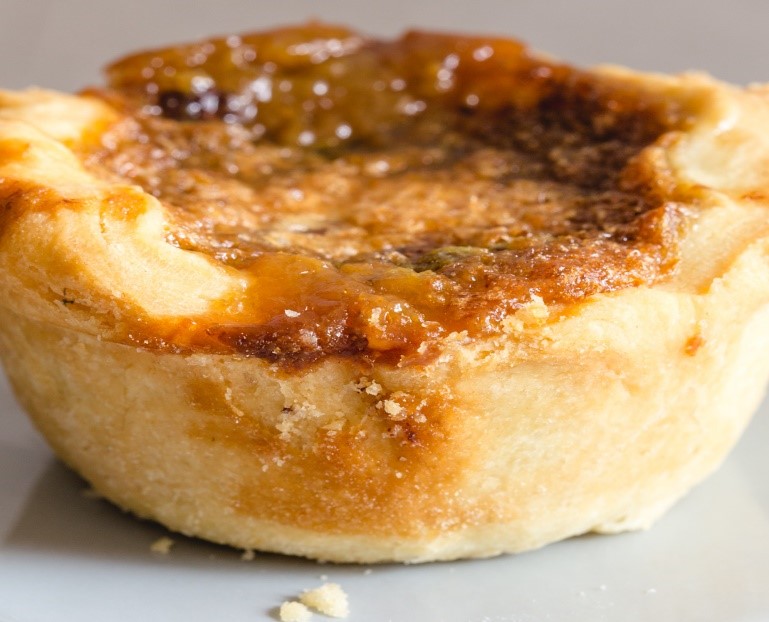 I love butter tarts and they are an absolute staple in my family's holiday dessert assortment. For generations my family has made these sweet little tarts and although each member has their own twist on the crust or the filling, they all are true and blue butter tarts. I actually hate raisins but I will still eat them even with the raisins in them, though if my mom is feeling generous around the holidays she will make some special for me without them or substitute the raisins for pecans if she's really feeling the Christmas spirit. 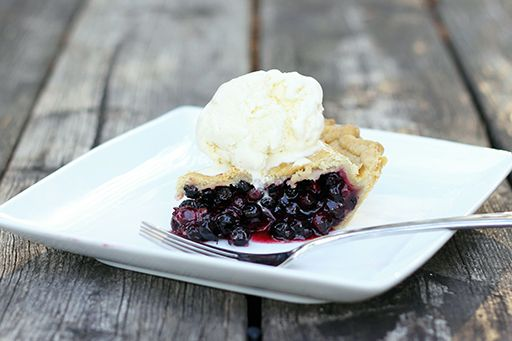 This is something that not only has its origins in Canada but more specifically comes right from my home province, Saskatchewan. They are berries native to the area that are most comparable to blueberries, though they are definitely not the same thing. When turned into a pie filling, the berries really bring out their beautiful deep purple colour and their sweet aroma. Growing up, I for some reason was not very fond of saskatoon berries, but as I have gotten older I have grown to love a slice of warm saskatoon berry pie with a scoop of vanilla ice cream. However, despite that I did not always enjoy the taste of saskatoon berry pie until my adulthood, the smell has always been one of my favourites and I have long wished that I could have a candle that had that exact smell.