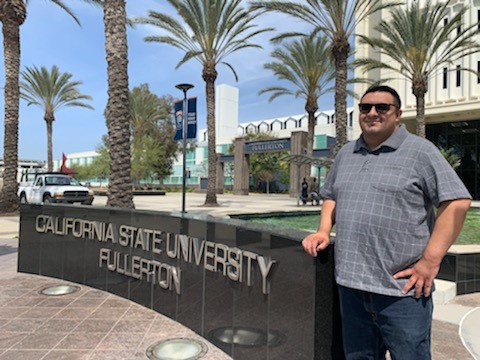 Anthony Munoz came to Chaffey College in 2016 to pursue a degree in psychology. But for a while, he didn’t feel like he belonged.

“I would go to class and just come home,” he said.

All of that changed when he connected with Extended Opportunities Program and Services counselors, who helped him see Chaffey as a second home and showed him his purpose.

Munoz now hopes to follow a similar path to the counselors who helped him succeed.

Munoz, a 2019 Chaffey graduate and a human services major at Cal State Fullerton, earned a full-ride scholarship through the school’s Guardian Scholars program in March. It’s a highly competitive scholarship that he says will help him pursue a career either as a social worker, a school counselor or a probation officer.

The Santa Fe Springs native is a former foster youth who was raised by an uncle since he was a baby. Even though Munoz did not live in a foster home with strangers, Munoz says the feelings of abandonment he experienced were just as difficult. Both of his parents suffer from substance abuse issues and his father has been associated gangs, he said.

“I made up my mind that their decisions were not going to affect my future,” he said.

After graduating from Chaffey College, Munoz transferred to Cal State Fullerton and joined the Guardian Scholars program, which provides support for former foster youths. He lives on campus and currently takes online classes due to the pandemic.

He hopes to keep going after earning his bachelor’s degree in 2022, eventually earning a doctorate.

Perseverance is especially important to the first-generation student. After all, he has six siblings, two who will soon be graduating high school.

“I want to show them that we have the opportunity to break the cycle of all the drama in our family,” he said.

EOPS Counselor Susanna Galvez said Munoz has not only served as a role model to his own siblings but to other EOPS and NextUp students as well.

“He never quits and keeps moving forward,” Galvez said. “I know that Anthony, like many of our former foster youth, takes a deep breath every morning and pushes himself to try regardless of what he has faced."